Chapter 1 – On the way to Safad

I loaded all the books, the laptop and clothing into my vehicle.
It was twilight time. The roads were open even though it was the eve of a holiday. Signs perhaps of the continuing war during this last year.

I was heading north…

Passing Tel-Aviv, I was approaching the satellite cities of Haifa, the Bay area – Kiriat Atta, Kiriat Motzkin and finally, Kiriat Bialik.
I came to the crossroads, when I noticed a young female hitchhiker signaling the passing cars.

“Where are you headed?” she asked me, peering cautiously through the window.
“To Safad” I answered.
“That’s great. I need to get to Achihud Junction”. She climbed in.
She was beautiful, pretty face with bright eyes, long blond hair.
I drove on.
“So, are you taking risks, like me? It is a bit risky to hitchhike, isn’t it?” I asked.
“Well,….yeh. That’s true…what kind of risks are you taking?” She replied.
“Well…I’m….”
“Come on” she urged me. “What kind of risks?”
“Well, I invented….developed some stuff in mathematics, and I’m going to write it up now” I answered.
“Oh…mathematics….” she muttered.
“Hey, this is not what you might think it is – it is colorful and pretty!!”
“It doesn’t matter. It is mathematics. I’m studying criminology. It is much more interesting than your mathematics stuff.”

It has been quite a while now that I have been wondering how to write my book. I had thought of having a meeting with an old girl friend of mine, to convey my ideas, but now it was like destiny’s will, with this hitchhiker. I looked for my wallet.

I opened my wallet and yanked out the photos….
“You see?” I asked. “This is my own development:” 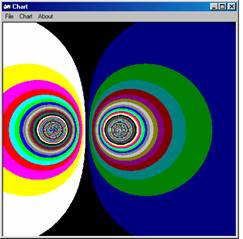 “These are potential lines of electrical charges”, I said.
“It looks nice”, she said.

And this is what Prof. Phil Fraundorf of St. Louis University did with Mathematica Software, which costs $1,880″. 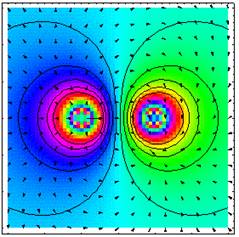 She started to talk about her job, her studies…her boyfriend. Then she pulled out her mobile phone and called for someone to pick her up from the road junction.

I pulled over. As soon as she slipped out, I did too and opened the baggage trunk and yanked out more photos from my bag. 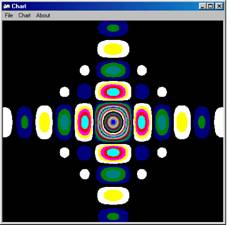 “How about this one? Isn’t it beautiful?” I asked. “It is a light beam, passing through a tiny rectangular shaped slit. When light passes through such a tiny slit, a phenomenon named diffraction occurs. Over on the opposite screen, a lighted rectangular shape is not seen, but rather darkened and lighted fields. The colors represent the light intensity on the screen. The more intensity of light, the more rings in the picture”.

Then, I showed her another photo. This was the solution of a very complicated mathematical equation: 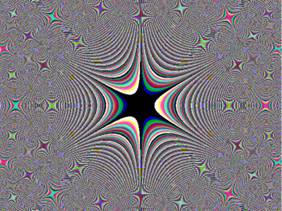 I showed her a copy of the “Catastrophe Theory”, a book I had bought a year ago in New York. This book had won Rene Thom, a French mathematician, the Fields Medal in1958 for his work in developing this theory.

The Nobel Prize is given for Chemistry and Physics, but somehow not for Mathematics….People say that it is because Nobel’s lover had an affair and eloped with a mathematician… Therefore, the Fields Medal is defined and considered as the Nobel Prize for Mathematics. It is awarded to young scientists under the age of 40.

Thom’s rival for the prize was none other than John Nash. It might have been the trigger for the outbreak of his schizophrenic illness. Years later, when he returned to health, Professor John Nash won the Nobel Prize for Economics.

“You know, I resolved this complicated mathematical problem that includes differential equations, in less than a minute with the algorithm that I have developed!” I said.

“I think that you shouldn’t show these photos to someone who is ‘high’…” she said.
“What do you mean by that?”
“You know, someone on drugs. He’ll look at it, and afterwards, without thinking about it, when moving his head, he would probably have flashes of these images…so, be careful”

I was driving up the mountains. The car’s engine was struggling bravely against the slopes. The urban lights on the rear mirror were getting smaller and dimmer…

I arrived at Rimonim Hotel in Safad and settled into a nice little room at the end of the corridor where I could peacefully finish my writing task, my mission for the near future.

The next day, after lunch, I took a walk through the alleys of the old city of Safad. The familiar landscape, my childhood sights, Mount Meron in the west and the memories moved me. I was flooded with waves of yearning.

I walked by the numerous small artists’ galleries. Frenkel’s Gallery, where my friend Meir lived next door, Katriel Efroni’s Gallery, who was my school teacher during my 7th and 8th grades. I reached my late grandmother’s home. Her house has been abandoned for many years.

Later in the evening I called my Uncle Nathan and Aunt Tova, who live in Kiriat Shmona. They were very glad to hear from me, since we hadn’t met for a long time. I always loved visiting my uncle’s office and its large printing press, to hear the clicking noises and rolling friction of the paper drawn by vacuum and the printing smell.

My uncle is self-taught. He barely graduated elementary school. For many years he studied alone from English books that he ordered from abroad. These were books of the 50’s that I so craved to get hold of, while I was studying physics at university back in the 80’s. I had one success. I managed to get one book from him: ” The Mathematics of Physics and Chemistry”.

I always wondered how he possibly understood chemistry, physics and mathematics while having only a few years of formal education. For many years he studied these sciences at night, invested in microscopes and chemistry lab equipment for his experiments, film developing etc. I admired him.

So today, as always, I left their home with a large package of paper to write this down, my own story.